History of the Traditional Customary People of Air Buluh

Datuk Mangkuto is the descendant of the king from the Minangkabau kingdom, West Sumatra, who was the first person to settle in Air Buluh Village. According to oral story of the villagers, Datuk Mangkuto cut the reed (bamboo) and then gold come out from it. Because of that Datuk Mangkuto decided that the area was suitable as a settlement. And then he named it Totak Buluh (Totak = cut; Buluh = reed). There is no clear information why Totak Buluh become Air Buluh.

Later then, Datuk Mangkuto inherited Air Buluh area to Datuk Telumak / Datuk Telamo. Datuk Telumak was appointed as Datuk Pucuk and become the leader of Air Buluh. Then the area was known as the Ulayat (territory land) of Datuk Telumak. 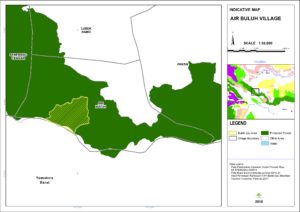 Air Buluh area in customary practice bordering with Nagari Timpeh, West Sumatra. The Ulayat boundary follows the watershed of the upper stream river, called aie lago. One watershed flows into Batanghari while the other flow into Kuantan River. In the midst of the two watershed is the borders of traditional customary of Air Buluh. In the customary language, it is called connected hills, gelek aie, guling sarak (follow where the water flows). The part that flows into the Batanghari River becomes the area of West Sumatra, while that which flows into the Kuantan River becomes Riau region.

Before being determined as a village, Air Buluh was united in the Kenagarian Tiga Koto. The community consists of four tribes, namely: Piliang Godang, Piliang Soni, Melayu and Patopang. Currently it has developed into 5 tribes with the addition of the Chaniago tribe. The Chaniago used to be under the auspices of a Patopang tribe, but because the number of Chaniago families had grown, the Chaniago tribe separated themselves from the Patopang.

The community still carries out a culture of mutual cooperation. Usually every weekend people work together or are called batobo. Batobo is carried out by the community by forming groups and by taking turns in doing activities in the group member’s farm. Batobo is usually intended to help each other manage community farm. In addition, the community also cooperates when one of the residents carries out events such as marriage, circumcision, celebrate the birth of a baby, etc.

After the issuance of the village law in 1979, the Buluh turned into a village. The entire governance of Air Buluh has now followed the prevailing laws and regulations. But there are still customary law that are carried out by the community.